Trumpet anemones are small organisms that live in colonies. Phosphorescent, they rise and fall with the water thanks to air sacs. Dependent both on each other and external circumstances, if they are conscious, theirs will be a collective consciousness. Drawing on a single, isolated phenomenon, Zsuzsa Rózsavölgyi demonstrates much more with her choreographic, mathematical and existential approach. She carries out experiments in the field of movement, searching for ways to connect through it, and asking what happens when we start to perceive our bodies through the outside environment? The starting point of the dance is the microcosm of the pond, where everything is connected. Through minimalist movement, three dancers explore coexistence in a colony. Their costumes glow under UV light as their dance rises and falls vertically, like bundles of trumpet anemones in the depths. Old Pond can be understood as a constant process of change that comes from both inside and out and transforms our common perception.

The performance will be followed by a moderated Czech-English discussion with Zsuzsa Rózsavölgyi and Jana Burkiewiczová from the Prague group Burki&Com on choreographic approaches to addressing environmental issues. Moderated by Ewan McLaren. 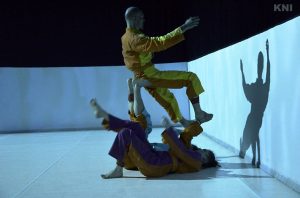 Old Pond was first presented in 2014 at MU Theatre in Budapest.  With impetus from Bazaar Festival, the artists decided to re-stage the project and present it as part of the program.

“Captain Cousteau in a woman’s body – she discovers and allows us to discover. Her imagination includes everything that can be transferred from lush, living nature to organic, cultural movement. The entire chain of evolution is depicted and elaborated here, rooted in the bio-romanticism we know from the visual arts and the use of elements such as micro-movements and micro-sequences.”  – Csaba Králl, ÉS

Partners for presentation at Bazaar Festival: The Hungarian Institute in Prague and Ponec – the dance venue.

Zsuzsa Rózsavölgyi is a dancer and choreographer. In addition to her studies in physiology and a degree in kinesiology, she studied dance and dance pedagogy at the Contemporary Dance Academy in Budapest. In her work, she collaborates with visual artists, musicians and scientists and received several nominations for the Laban Prize for her multimedia work. She participated in the 2018 Bazaar Festival as part of the European tour of her project 1.7 and also visited the festival in 2021, with her work-in-progress Anthropodeny. She is currently associate professor in contemporary dance at the National Academy of Arts in Oslo.